Fire season blew up in just a matter of weeks this year --speaking metaphorically. As of this writing, thankfully, there are no wildfires locally that Initial Attack Crews have not corralled in fairly short order because they're attacking the hell out of 'em.

No, what I'm referring to is the Fire Danger Rating. This spring it escalated from Low to High, without stopping to say Hello to Moderate -- something fairly unprecedented. Now in late June, it's just jumped to Very High -- because the ERCs are low. ERC stands for Energy Release Component, which comes from measurements of rain, wind, humidity and such, data that allows firefighters to somewhat predict fire behavior on a landscape or a local county.

The readings aren't surprising. --Poor Boston! 22 feet of snow this winter? ALL the snow that Montana could have used in the mountains this spring fell instead on the East Coast. And our rains this time of year, well, I started watering weeks ago, which is too early; and oldtimers are studying the rivers and shaking their heads. Never seen it so low before this time of year, they say.  I agree.

Now the Fourth of July is coming!  So a Facebook poster for the Missoula County Fire Protection Association that captures the concern from a Fire-Response Manager's perspective seemed advised. Temperatures 20 degrees above normal (we've already hit above 100 twice this year -- breaking records with 103).  Add fireworks and tinder dry grass on a slope, and maybe some wind --- why not? it's common -- and I figured it couldn't hurt to suggest to the public at-large that partying at a safe, permitted PUBLIC  fireworks event was the thing to do.

BETTER DISPLAYS OF AFFECTION FOR U.S.

Today, the Fire Danger went to EXTREME and the County Commissioners banned fireworks use. You can still buy them (I feel for the business owners who, I'm sure, planned on robust sales), but fireworks use is banned in Missoula County (and increasingly elsewhere, it appears). So buy the hot color bursts if you must, but save 'em all, even the innocent-looking sparklers, for later, maybe New Year's Eve, when -- we hope/pray -- there's snow on the ground and you'll just be annoying your neighbors, not potentially setting 'em on fire. As Wenatchee, Washington, can attest just one errant spark can take out a good chunk of your community, or an urban landscape about which you care.

Quick codicil: Wildland fire is beneficial. It created the landscapes that we love. And Earth is the only planet in our solar system with the ingredients for free-ranging fire, without which we would not have most likely evolved as a species. Put another way, fire is a God-Given Gift, but unlike a tornado or an earthquake, we can affect the outcome (path) of a wildand fire and its more devastating effects. Learn more at Firewise.org and change your property's fate! Thanks to those already trying to live a Firewise life!! 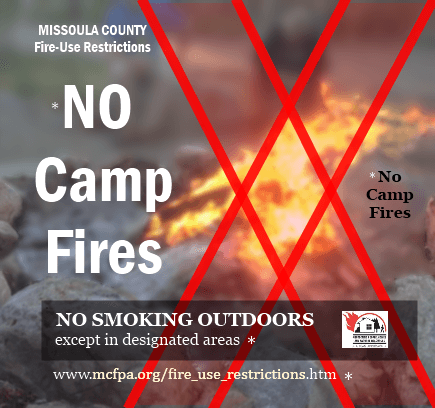 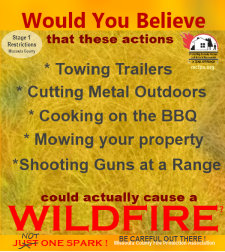 The Missoula County Fire Protection Association wants to prevent destructive fire from occurring. At the same time, we're working to prepare for it. We have good equipment, good training, and good cooperative agreements, but only you...the person who lives in the home and on the land... can truly prepare for the effects of fire. Let us show you how. Use the resources of this website and contact us with your Fire Safe questions. Thanks for stopping by!" 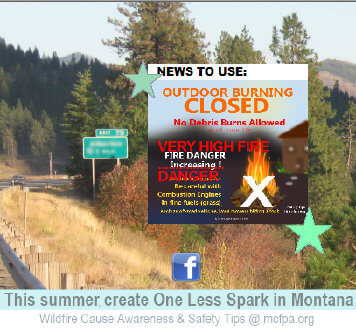