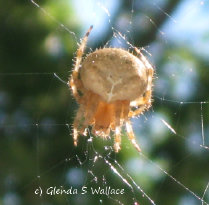 So.....she started making a home in the corner of my kitchen porch in the late summer:  A large, fat-bottomed, garden spider, who immediately called to mind Charlotte, the spider of literary fame.  My spider appeared one afternoon, a day when a friend with a scientific nature was visiting.  Good timing.

"You have a spider on your porch eating a yellow jacket," she said.

Melee (pronounced Meh-Lee) was tending to the plants along the kitchen porch rail, while I was inside working within earshot on deadline at the computer. Prior to the plant tending, Melee cleaned my refridgerator, tossing out the suspect leftovers. We've been friends for many moons.

And she (he ?) was. Pictures don't lie. Consider the caramel coloring, the golden knee pads on those reptilian legs, the intricate web design. One couldn't actually be judged as Odd for admiring, perhaps encouraging such a neighbor to linger, could one ?

I got out the camera, knowing my limits for Odd. I admire the spider's role in our ecosystem:  Eating mosquitoes and all that. Plus, this one recalled E.B. White's clever arachnoid Charlotte in "Charlotte's Web."  My mother's name is Charlotte -- a beautiful name for a beautiful soul.

All this does not add up to living with a spider spinning her web in the vestibule of a well-used door to my home.

"Isn't she beautiful," Melee stated again. "Will you let 'er stay? Maybe you could put some duct-tape from here to there, to mark off the web, so you don't walk into it."

While I studied the spider, contentedly sucking on fresh, yellowjacket (wasp) juice, her amazing, sticky-threaded web did its work.  Another bug had flown too close. Quickly, she was up and wrapping her new prize, rendering it somehow into an utilitarian gray blob with her silky-looking webbing.  When she was done, she went back to her first meal -- all of which was kinda cool.

So, this Charlotte's Web lasted that first day and the next. The web glistened in the early morning light, and in the middle of this marvelously translucent orb there she was  She was active in the evening, too. As I watered the lawn, I passed by the web more than a dozen times, the occasionally ignited porchlight attracting moths and other tiny winged creatures.  A very nice spot for a spider web, I thought.   During the daylight hours, she slept ( ? ) tucked up against a joint in the roof.  This is where I preferred her. When she was "on the web," so to speak, " she made me a tad nervous as I repeatedly crossed her path.

And so it was that on the third evening I cracked. The proverbial straw: A single, sturdy-looking tendril that she'd spun to anchor her work to the far side of the porch, my side of the porch. Oh NO.

Immediately, I snagged a large, clear plastic container, one with a wide opening, about seven inches diameter, one with a lid. And I neatly caught up my visiting spider sitting within her web and transported both across the yard to the farthest, wildest spot, where I bent down to carefully tip her out.

Nothing doing. She sat inside the container in her remnant and she didn't budge. I shook the container gently again. Still nothing. Wearing no shoes and with dusk settling in, I gave up. I placed her within the silvered branches of a long-ago-felled apple tree that I'd kept for lawn art. It was the best I could do. She was in her web in the container, off the ground, and not easily reached by birds or cats.

When I retrieved the container later, there was no sign of her.  I looked high and low and wondered what it felt like to be so tiny and to have your world so easily and dramatically changed.  Does a spider want to find its way home ?

Hearing my speculations, my sister said, "Now don't be offended, or think you have to defend yourself, but I think That Is Bizarre. It's just a spider. You kill them. You don't find them new homes."

I laughed. And I ask you. Ain't bizarre a delicious word ?  Drop me a note here or on Facebook, perhaps with a story of your own, and I'll certainly share 'em here, as I can.

“Do you understand how there could be any writing in a spider's web?"

"Oh, no," said Dr. Dorian. "I don't understand it. But for that matter, I don't understand how a spider learned to spin a web in the first place. When the words appeared, everyone said they were a miracle. But nobody pointed out that the web itself is a miracle."

"What's miraculous about a spider's web?" said Mrs. Arable. "I don't see why you say a web is a miracle--it's just a web."

** Some pages not optimized yet.
More Blog Articles**:
Telling the MRFD Story in a Website
Letting It Go On the Dance Floor &
Can't Ignore Our Fire Planet
Play It Again, Please
Fire Danger for Other People & Small Town Saturday Night
Caring for Spiders: Bizarre...World?
A Montana Coming Home to Fall
Branding Myself
Big Time Music in a Small Town
Facing the Truth About Facebook
Cornucopia of Creativity
Summer Whizzing By like a Bullet in Cured Grass on a Slope
"...Out come the sun and dried up all the rain, and the itsy bitsy spider climbed up the spout again......

....I believe in love and, who knows where or when, it's coming around again." 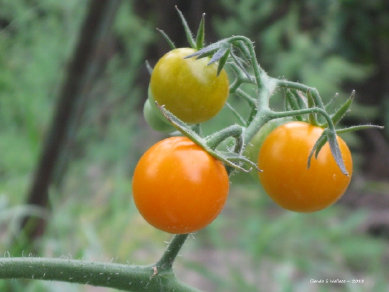 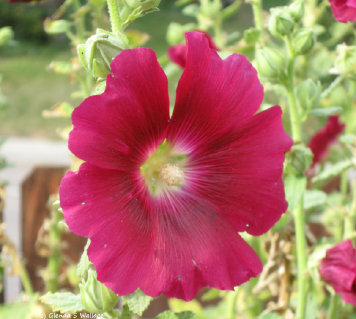